The Ochydactyl is an apparatus used by musicians to increase their fingers’ nimbleness, independent action, and strength. It was patented by French inventor Georges Rétif in 1929. The U.S. patent states:

Skill in playing musical instruments is acquired only after prolonged practice, which endows the performers fingers with nimbleness, independent action, and strength. The objective of the musical exercises performed by the student is to develop certain muscles of the fingers and to render their action independent, since naturally these muscles have a tendency to act in pairs. The objective of the present invention [The Ochydactyl] is to replace this long, arduous study, which in the case of students of no great talent sometimes without success, by an adaptation of the muscles acquired mechanically. The part of the operator is reduced to a simple, passive resistance or contraction opposed to the forced movements.

The Newspaper ad below claimed the Ochydactyl “Saves 1 hour 1/2 each day” and highlighted endorsements from notable professors who “use the Ochydactyl every morning, for 7 minutes per hand.” 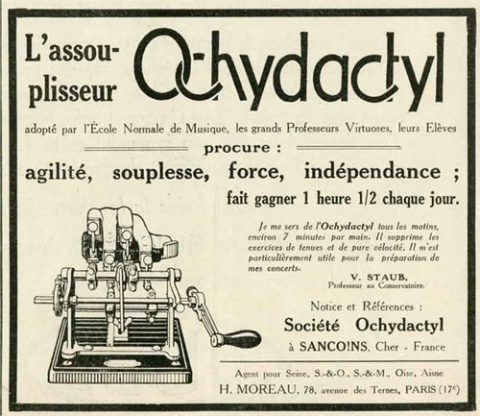 The following video (in French) shows us what early 19th century piano makers created to promote practice in the music schools. They saved the best for last.